The goals of We R Native are to:

The goals of Healthy Native Youth are to:

Both resources are supported by the Indian Health Service HIV Program and the Secretary’s Minority AIDS Initiative Fund. 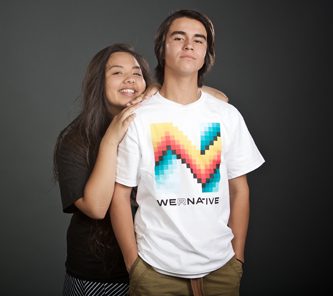 Background. We R Native is a multimedia health resource for Native youth, by Native youth. The service was designed using behavior change theory and extensive formative research with AI/AN teens and young adults across the U.S. We design our health messages to address the social, structural, and environmental stressors that influence adolescent health; with particular focus given to the prevention of suicide, bullying, STDs, teen pregnancy, and drug and alcohol use.

We R Native launched in 2012, and a mobile version of the site launched in 2013. The site contains over 330 health and wellness pages that have been reviewed by Native youth and topical experts. The Ask Auntie Q&A service features over 100 questions and answers. Special features include monthly contests and community service grants ($475). All We R Native media channels promote interactivity and reciprocal communication by encouraging feedback and story sharing. The project is funded by the Indian Health Service HIV and behavioral health programs, and is supported in-kind by a SAMHSA GLS grant.

Audience: Our primary audience is AI/AN teens and young adults (13-24 years old) located throughout the U.S. The site has been accessed by youth from every state, with strongest utilization across the west coast. Roughly 2/3 of the website’s users are female; 1/3 are male.

Ambassadors. We R Native’s Youth Ambassadors are the heart and soul of We R Native. The Ambassador program is a way for youth 15-24 years-old to join the We R Native development team, get involved in their community, and make a positive difference around the topics that matter most to them.

Reach. We R Native collects digital metrics recommended by digitalgov.gov. Since its launch, the website has received over 323,800 page views. The average user visits roughly 3 pages per visit. The Facebook page and text message service alert followers to health tips, contests, internship opportunities, and current events. Altogether, We R Native reaches over 32,000 users per week through its various media channels.

Healthy Native Youth was collaboratively designed by the Northwest Portland Area Indian Health Board (NPAIHB), the Alaska Native Tribal Health Consortium (ANTHC), the Inter Tribal Council of Arizona (ITCA), the University of Texas School of Public Health (UTSPH), and a team of national stakeholders. Our goal is to support the dissemination of healthy-decision-making curricula to tribal health educators and teachers, and empower AI/AN communities to select and implement evidence-based programs.

The portal currently includes Native It’s Your Game (Native IYG), Native STAND, Native VOICES, and Safe in the Village, amongst others. The portal allows visitors to filter and compare curricula on several dimensions, including age group, delivery setting, duration, cost, and evidence of effectiveness, to determine best-fit for their community or setting. Visitors are invited to upload their own culturally-relevant programs for inclusion on the website.

In 2020, 349 AI/AN youth 15-24 years-old completed We R Native’s nationwide Youth Health Tech survey (av. age = 19). Altogether, 93% (n=326) reported using their phone to get online at least once a day, and most reported having regular access to multiple technologies, including a desktop or laptop computer in addition to their smartphones. Participants reported frequent communication with friends or family during the day – on average sending 1-50 text messages per day, while 38% reported spending an average of 3-4 hours on social media per day.

When asked where they go to get health information, most indicated that they rely on the Internet (54%), followed by social media platforms (48%).The most important health topics identified by participants included: Native Identity or Cultural Pride, Mental Health, Social Justice and Equality, Physical Health, and Alcohol or Drug Use.When asked how COVID-19 has affected their technology use, 62% of Native youth reported being online more now than before the pandemic; only 6% reported being online less. To read the full Report: 2020 Native Youth Health Tech Report

In 2016, the NPAIHB surveyed over 675 AI/AN teens and young adults on their media technology use and health information seeking practices and preferences. 78% of youth surveyed had regular access to a smartphone and 46% had regular access to a computer. Over 92% reported accessing the internet from a phone on a daily or weekly basis, and 50% reported going online from a computer as often. Over 62% reported getting health information from the internet on a weekly or monthly basis, and 66% reported getting health information from social networking sites as often. Over 63% reported having searched online for information about “fitness and exercise,” 45% “stress or anxiety,” 44% for “sleep,” 42% for “colds/flu,” and 40% for “depression or suicide.” When asked about sensitive topics like depression or birth control, respondents reported feeling most comfortable going online (39%), talking to a friend or sibling (37%), or talking to a clinician (26%), trusted adult (24%), or a parent (27%). Read more and print the brief overview of the survey results here: We R Social – Youth Health Tech Survey 2016

To learn more about the survey, email native@npaihb.org

In 2009, the NPAIHB worked with its member tribes to survey Native youth (13-21 years old) on their media technology use practices and preferences, to determine whether new technologies could be an appropriate avenue to reach Native youth. Seventy-five percent of NW AI/AN youth reported using the internet and 78% reported using cell phones on a daily or weekly basis, mirroring patterns reported by teens in the general population. Over 75% reported going online to get health information. Based on this feedback, the NW tribes felt confident that technology-based programs could be designed to deliver culturally-appropriate health education to AI/AN youth, in ways that are accessible and relevant to them.