The Siletz Tribal Health Care Program is the delivery of comprehensive health care to the Siletz Indian People and their dependants residing within the eleven county service area of Western Oregon. Services are provided through a combination of direct care, contracts and referral to appropriate agencies. 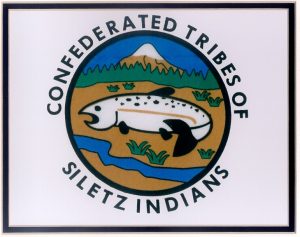 The new Siletz Community Health clinic on Gwee Shut road has started contruction with completion by Spring of 2010. There will be an expansion of medical and dental clinic capacities as well as lab and pharmacy size. It is an environmentally-conscious building with grey water recycling that will reduce water usage by up to 75%. It is being funded by grants from IHS, EPR funds set aside, third party revenue and loans from Tibal EPR funds. The clinic is currently 15,000 square feet but will grow to 45,000 square feet between 2006-2016.

The ancestors of the Siletz people originally lived along the coastal area including what is now part of Tillamook, Lincoln, and Lane Counties for thousands of years. The discovery of gold in the land of the Takelma in the Rogue River Valley during the winter of 1851-51 brought miners by the thousands. By 1853, the flood of miners extended through the canyons of the Rogue and Illinois Rivers to the lands of the Tututni and Coos. Amidst increasing hostilities the US government removed the Indians from their homelands in Western Oregon and placed them on reservations in Siletz and Grand Ronde. The Siletz Reservation reached from Cape Lookout in Tillamook County on the north to near the mouth of the Umpqua River on the South. Up until that time, the land had been home to the Lower Umpqua, Siuslaw, Alsea, Yaquina, Siletz, Salmon River, and Nestuccs Indians. Of the 2,025 Indians of various tribes placed on the reservation at Siletz in 1851, only 259 had treaties with the US Congress. The remaining 766 didn’t qualify for goods or assistance from the government. Consequently, there was a marked decline in health care. The erosion of their reservation lands began in 1865 when Willamette investors wanted a railroad route to the coast. A presidential order cut the reservation in two. Soon after, a large section of the middle of the reservation including all of Yaquina Bay, was opened to settlement. In 1875, Congress passed a law closing the Alsea Reservation, the southern part of the old Siletz Reservation. In 1887, the Dawes Act allowed for allotments to the Indians. Unallocated lands were declared “surplus” and passed into the public domain. In 1956 through PL 588, the Western Oregon Termination Act, the government terminated the Siletz Tribe. The remaining Siletz lands were sold and Government Hill was given to the city of Siletz. After years of working together as a united people, the Siletz Tribe was restored and reasserted their Indian identity with the enactment of the Siletz Restoration Act, PL 95-195 on November 18, 1977. The Siletz Reservation Plan was approved in September 1980. The reservation now contains the 39 acre Government Hill parcel and 3,630 acres of timber lands in Lincoln County, as well as several parcels of land purchased by the Tribe.

The Confederated Tribes of Siletz Indians (CTSI) once inhabited a range from northern California to southwest Washington. The tribe owns and manages a 3,666-acre reservation located along the Siletz River in the Central Oregon Coast Range of central Lincoln County, Oregon, approximately 15 mi northeast of Newport. It owns a checkerboard of approximately 15,000 acres in and around the small city of Siletz.

Siletz Dee-ni is a Tolowa-Galice language, one of the Pacific Coast Athabaskan languages, that were historically spoken by Native Americans on the Siletz Indian Reservation in Oregon. According to a report by the National Geographic Society and the Living Tongues Institute for Endangered Languages, it is the last of many languages spoken on the reservation and was said in 2007 to have only one living speaker. However, according to a later report in The Economist, the language has since been at least partially revived thanks to an on-line dictionary project, and in some areas, “many now text each other in Siletz Dee-ni.” The tribe has a language revival program with classes in three area offices and Siletz Valley school.

The Siletz Language Program is directly focused on SW OR / NW CA Athabaskan. Over the past four and a half years, work in the project has been developing a basic Language study program, and actively teaching classes in Siletz and three Area offices, and also in the Siletz Valley School. An Athabaskan Language Dictionary, “Nuu-wee-ya’” (Our words), has been compiled from many works over the last century and transliterated into the Practical Alphabet. It consists of roughly 400 pages and approximately 12,000 entries and reflects the dialectical differences of their language. The next major step will be a “Talking Dictionary” where users can select a word, click on an icon and hear the word being spoken.

The confederation takes its name from the Siletz River, which surrounds the reservation. The word “siletz” translates into “coiled like a snake,” describing the route of the river winding around the land and mountains to the ocean. It includes remnants of the Siletz, a Coast Salish people who inhabited the area up until the middle 19th century but who are no longer counted separately in the larger confederation.

On November 18, 1977, the Confederated Tribes of Siletz became the second tribe in the U.S. to have its federal status restored, and returned to being a sovereign government. On June 2, 1979, tribal members adopted a constitution. On November 1, 1979, people of the town of Siletz, voted 148 to 134 to give back to the Tribe approximately 36 acres of former tribal land, which was originally the site of the old Siletz Agency, “Government Hill”. The tribe had given this land to the city at the time of termination.