The Northwest Band (NWB) of the Shoshone Nation do not operate a health care facility. Tribal members residing on the Fort Hall Indian Reservation are provided health services through the IHS facility in Fort Hall, Idaho or by private doctors. The NWB Shoshone Community Health Department has a Contract Health Services Delivery Plan.  This service delivery plan has been developed by the Community Health Department with technical assistance from the Indian Health Services. The purpose of this plan is to establish administrative responsibilities associated with the Contract Health Services Program. The tribe 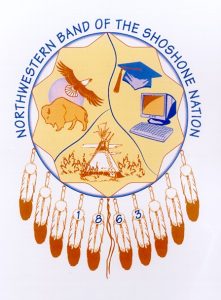 provides services out of the Blackfoot, Idaho office for both Idaho and Utah tribal members. Tribal health programs include a CHR and Indian Child Welfare and A&D Programs, in Idaho. The total patient population is 411.

The Shoshone people lived for hundreds of years in the area of Wyoming, Utah, Nevada, and Idaho. When horses were introduced to the tribe in the early 1700’s, many tribal members were able to travel over great distances to hunt many types of game to feed their families. Groups of extended families traveled together and would gather in larger camps during the year for protection against enemies, to trade, and to socialize.
There were three major bands of Northwestern Shoshone at the time the first Mormon pioneers began settling northern Utah. Chief Little Soldier headed the misnamed “Weber Ute” group of about 400, who occupied Weber Valley down to its entry into the Great Salt Lake. Chief Pocatello commanded a similar number of Shoshone, who ranged from Grouse Creek in northwestern Utah eastward along the northern shore of Great Salt Lake to the Bear River. The third division of about 450 people, under Chief Bear Hunter, resided in Cache Valley and along the lower reaches of the Bear River. Bear Hunter was regarded as the principal leader of the Northwestern Shoshone, being designated by Mormon settlers as the war chief who held equal status with Washakie when the Eastern and Northwestern groups met.
What became the Northwestern Band of Shoshone were parts of those groups who traveled largely on foot living off the land in a delicate balance. The expression So-so-goi means “Those Who Travel on Foot,” this expression was used to describe the band.
On April 29, 1987, the Northwestern Band of Shoshone Nation became a federally recognized tribe, separate from other bands of Shoshones. The Northwestern Band of Shoshone were additional signers to the Treaty of Box Elder of 1863.

The Northwestern Shoshones in the 1800s moved with the seasons in four groups of 300 or 400 people from the Bear Lake Valley to the eastern shores of the Great Salt Lake.
Nearly all of the tribal members live in southern Idaho and northern Utah, with few members scattered throughout the United States.
Blackfoot, Idaho, Bingham County – Southeastern Idaho.
Brigham City, Utah, Box Elder County – Northern Utah.

Nearly all of them live in southern Idaho and northern Utah, with few members scattered throughout the United States.  Based in Blackfoot, Idaho

Traditionally, the Northwestern Band of Shoshone Tribe speaks the Northern Shoshoni dialect of the Shoshoni language, which is written in the Latin script.

Based in Blackfoot, Idaho, most members of the Northwestern Band of Shoshone Nation Reservation subsist on farming. Their pre-treaty economy consisted of hunting, fishing, gathering, and trading. Their land base includes 187 acres of land given to the tribe by the LDS Church in 1989, which constitutes the Tribe’s reservation. There are additional privately owned Indian lands held in trust by the Bureau of Indian Affairs nearby. Today, many members reside along Utah’s Wasatch Front.

The tribe has adopted an economic-development model rare in Indian Country. Their business interests are severed from tribal politics. And their businesses — centered in national-security and language-translation contracts, construction and, soon, alternative energy — are likewise divorced from their trust lands.

The tribe’s headquarters is in Brigham City, Utah,[1] but they also have a tribal office in Pocatello, Idaho. The tribe is governed by a democratically-elected, seven-member tribal council.
The Northwest Shoshoni Tribal Council members serve four-year terms and also select a Chair, Vice-Chair, Secretary and Treasurer from their membership.  The Northwestern Band of Shoshone ratified their constitution on August in 1987.
In January 1995, tribal enrollment of the Northwestern Band of the Shoshone Nation numbered 454 members.
In 2002, there were 431 enrolled members in Idaho and Utah.

In February of 1875, by an executive order, President Grant established a 100 square mile reservation for the Lemhi people in the Lemhi Valley for “the exclusive use of the mixed tribes of Shoshone, Bannock, and Sheapeater Indians.” Tragically, almost immediately, the United States government and local residents began efforts to withdraw the executive order establishing the reservation. The forced removal of the Shoshone people from their ancestral homelands to the Fort Hall Indian Reservation in 1905, and again in 1907, began what many have called the “Lemhi Trail of Tears.”