Klamath Tribal Health & Family Services is a division of the Klamath Tribes and is responsible for providing healthcare services to the Native American population who reside in Klamath County.

Klamath Tribal Health & Family Services (KTHFS) operates a rural outpatient clinic that serves the local Native American population. The Klamath Tribes Health & Wellness Center opened in January of 2006; prior to its’ opening, the new center healthcare services were provided from two modular buildings in Chiloquin and a satellite 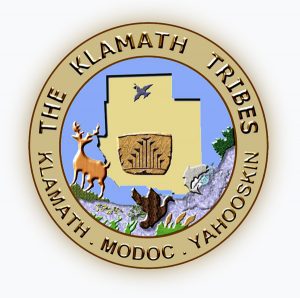 pharmacy in Klamath Falls. The Klamath Tribes Health & Wellness Center is located in Chiloquin, Oregon, approximately 30 miles north of Klamath Falls. The center houses an outpatient medical clinic, a six chair dental clinic and a full pharmacy. Alcohol & Drug Abuse and Behavioral Health Services are provided in both Chiloquin and Klamath Falls.
At the Medical Clinic Primary care services are provided by a skilled team of licensed practitioners made up of family physicians, family nurse practitioners, and more. Additional staff may be added as the center grows.

General dentistry services are provided by a skilled team of providers made up of general dentists, registered dental hygienists, a pediatric dentist, and more. Their goal is to educate and improve overall dental health for the patients.

Websites to visit for additional information about the Klamath Tribes and the local area include the following:

The Klamath Tribes claimed the east slopes of the Cascades and the adjoining desert areas from the Deschutes River headwaters in the north to Mount Shasta in California to the south. The Klamath people were hunters and gatherers. In 1864 the Klamath people signed a treaty with the federal government and were placed on a 1.1 million acre reservation. Encroachment later led to the infamous Modoc War of 1873.

The Klamath Tribes were subsequently terminated from federal recognition in 1954 by an act of Congress. Most tribal land was liquidated when Congress ended federal recognition. In August of 1986, after thirty two years of persistent lobbying, tribal leaders were finally able to have the termination revoked through passage of P.L. 99-398, The Klamath Indian Tribe Restoration Act. Some lands were restored when recognition was restored.

The Klamath people are a Native American tribe of the Plateau culture area in Southern Oregon and Northern California.

Prior to the arrival of European explorers, the Klamath people lived in the area around the Upper Klamath Lake and the Klamath, Williamson, and Sprague rivers. They subsisted primarily on fish and gathered roots and seeds.

The Modoc’s lands included the Lower Lost River, around Clear Lake, and the territory that extended south as far as the mountains beyond Goose Lake. The Yahooskin Bands occupied the area east of the Yamsay Mountain, south of Lakeview, and north of Fort Rock. Everything needed was contained within these lands.

The present-day Klamath Indian Reservation consists of twelve small non-contiguous parcels of land in Klamath County. These fragments are generally located in and near the communities of Chiloquin and Klamath Falls. Their total land area is 308.43 acres.

The Klamath Language, like most other American Indian languages, is quickly losing its fluent speakers.

After the white man came into this region, the Klamath people began learning English. Everyone, of course, continued to speak the native language. But, unlike most people here today, they were bilingual. They spoke both languages.

Each language came to fill a special niche in Tribal society. The Indian language served as the vehicle for the Indian culture. It spoke to personal, intimate, family needs. And English came to function as the instrument of larger Tribal concerns, of legal, official affairs. English became the medium of contact with the outside world.

English is the language of the public schools and all other formal education, and therefore it, and not Klamath, has served the purpose of literacy. But meanwhile the Klamath language has not been passed on to the younger generations, and consequently it has survived only with those few elders who remember it, and in books where it has been preserved in writing.Several systems of spelling have been used to write Klamath. Albert S. Gatschet, who wrote down much during the last century, used one system. And various Tribal members have used their own systems. But the system employed by M.A.R. Barker in his publications of 1963-64 most accurately represents all of the sounds of the Klamath language. For people who know the language well, any spelling system that they can easily read is adequate. But when there are not many who speak it anymore, and when people are wanting to learn it, then it is best to have a spelling system which records all the subtle distinctions of the original sound system.

Klamath also Klamath–Modoc and historically Lutuamian, is a Native American language that was spoken around Klamath Lake in what is now southern Oregon and northern California. It is the traditional language of the Klamath and Modoc peoples, each of whom spoke a dialect of the language. As of April 1998, it was spoken by only one person. As of 2003, the last fluent Klamath speaker in Chiloquin, Oregon was 92 years old.

Outdoor sports are unlimited for all ages and all seasons. More than 82 lakes and streams can be accessed. Over 150,000 acres of wildlife refuges are set aside primarily for wildfowl. Facilities for golf, racquetball, tennis, boating, mountain biking, horseback riding, white water rafting, jet boat excursions and sailing sports keep the outdoor person involved. Winter sports feature ice-skating, cross-country and downhill skiing, snowmobiling and snowshoeing.
There are also many other recreational opportunities through the Ross Ragland Theater, the Linkville Theater, the Running Y Ranch Resort, the Klamath County Fairgrounds, KLA-MO-YA Casino and of course Crater Lake National Park, the deepest lake in the United States. Klamath County is also the home of the Volcanic Legacy All American Road, a 500 mile scenic by-way that connects Crater Lake with Mount Lassen with miles of beautiful outdoor scenery and rich volcanic history from our region.

The Klamath Tribes are proactively working to address high levels of unemployment and underemployment by fostering an environment of entrepreneurship. By expanding their unique training and technical assistance programs, they will extend business opportunities to remote tribal members and tribal youth while increasing the services and resources available to existing businesses and emerging entrepreneurs.

Klamath Falls is classified as high desert with total precipitation averaging 18.05 inches annually including snowfall averaging 38.5 inches annually. Framed by the Cascade Mountains on the west, at an elevation of 4,105, the humidity is low and temperatures seldom rise above 100.
Cost of living in Klamath County is lower than the national average making our community very appealing to potential residents and businesses. Additionally, quality of life in Klamath County is one of the biggest reasons people chose to live here. The low cost of living, variety of services, and location make the Klamath Basin a popular place to retire. Today the Tribes operate with a budget of over $12 million annually, with over 30 different departments and services offered. The Klamath Tribes have more than 4,800 members, but fewer than 640 live in their Chiloquin community.