With drums, blessings and thanksgivings, the Cowlitz Indian Tribe dedicated a new medical clinic they said has been more than 20 years in the making.
“We are living the dream of our ancestors,” tribe Chairman William Iyall said during the dedication ceremony. “We’re working hard to achieve what they started so long ago.”
“It’s a good day for (the) Cowlitz. It’s a happy day,” said Cassandra Sellards-Reck, chairwoman of the tribe’s health board. “We strive for wellness for all our members 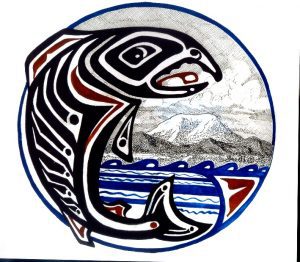 and this clinic will help with that.”

The Cowlitz Tribe was not federally recognized until 2000, but officials said the tribe’s health care program began as a dream in the 1990s.
Eventually the tribe would like to offer dental, pharmacy and x-ray services, but for now the building will house primary care space, mental health treatment areas and a separate chemical dependency unit.
The 12,000 square-foot clinic is located directly behind the existing tribal administrative building at 1055 Ninth Ave., Longview. Work began in 2009, but the building’s completion was delayed as plans were redesigned several times to squeeze as much space as possible out of the site, said Steve Kutz, chairman of the tribal council and manager of the medical clinic.

The clinic has four exam rooms and a treatment room on the primary care/mental health side. Space also is reserved for a three-chair dental clinic, though officials are still trying how to make that service profitable before offering it, Kutz said. There also is a meeting space, which has been sorely needed.

“We were double and triple bunked over there,” Iyall said. “We’ve been waiting for this for a long, long time.”
The building features native artwork, large murals of trees and nature scenes and carvings by tribe member Robert Harju, who also has carved canoes for the tribe.

The nearly $3 million building was paid for with a $1.13 million grant from the federal Indian Health Services agency and $500,000 from the federal Housing and Urban Development department. The remaining costs were covered by the tribe with health care dollars.
The medical clinic has 1,400 active patient files, including both Cowlitz tribal members and members of other tribes. Federal regulations require the tribe to provide medical care for any eligible member of other federally recognized tribes, Kutz said. The goal of the Cowlitz Indian Tribal Health Clinic is to provide a Holistic Approach to Health Care that promotes Disease Prevention, Treatment, and Education.

Cowlitz people are a southwestern Coast Salish indigenous peoples of the Pacific Northwest. Today they are enrolled in the federally recognized tribes: Cowlitz Indian Tribe, Quinault Indian Nation and the Confederated Tribes of the Chehalis Reservation. The Cowlitz tribe consists of two distinct groups: the Upper Cowlitz, or Taidnapam, and the Lower Cowlitz, or Kwalhiokwa. In 1906 the tribe, under the leadership of Chief Atwin Stockum, began formal political relations with the United States.

The Cowlitz tribe was historically based along the Cowlitz and Lewis Rivers, as well as having a strong presence at Fort Vancouver. The first white known to have contacted the Cowlitz was French-Canadian Simon Plamondon of Quebec. He eventually married Chief Scanewea’s daughter, Thas-e-muth. Several other French-Canadians settled near by Plamondon and also took up farming. Catholic missionaries began to visit the Cowlitz people in late 1838, with the St. Francis Xavier Mission eventually being built there. In December of that year, François N. Blanchet preached from Plamondon’s residence to the farmers and several Cowlitz natives. The Hudson’s Bay Company agricultural subsidiary Puget Sound Agricultural Company established Fort Cowlitz in 1839.

Today, the Cowlitz are scattered, though many still remain. Relatively few actually live near the Cowlitz River (perhaps 30 or so families). Most of the 1,400 who belong to the tribe live within the radius of a two-hour drive, a recent poll shows. The tribe’ s business office, presently in Longview, keeps track of the network of Cowlitz individuals and families living, for the most part, in western Washington. Biennial meetings in June and November on Cowlitz Prairie, the tribal heartland, bring them together to renew themselves as Cowlitz as well as to carry on the important business of fighting for their fishing rights, for their own reservation and a Cowlitz tribal center.

The original language of Cowlitz tribes, the Cowlitz language, belonged to the Salishan family of languages among Northwest Coast indigenous peoples. Later, the Upper Cowlitz adopted the Sahaptin language from east of the Cascade Mountains. Modeste Demers reported that the Cowlitz peoples were fluent in Chinook Jargon.

The Cowlitz Indian Tribe, federally recognized in 2000, received news from the Bureau of Indian Affairs that they can establish a 152-acre reservation on Interstate 5 near La Center, Washington, and build their proposed mega-casino.

The tribe applied in 2002 to establish the reservation, intending to create a $510 million casino-hotel complex. The Indian Gaming Regulatory Act prohibits gaming on lands acquired in trust after its 1988 enactment. But the Cowlitz Tribe found a loophole. The Cowlitz qualified for the “equal footing” exception, directed at landless tribes with sufficient members and no established reservation. This project will allow the Cowlitz Tribe to create hundreds of jobs and invest in other forms of economic development. It will also allow the tribe to begin the restoration of its homelands.

The Cowlitz political system evolved from a strong system of chiefs, to an elective presidential system in the early 20th century; and a constitutional elective Tribal Council system after 1950.