The Coquille Community Health Center was developed and administered based on a Health Plan and Community Health Risk Survey developed by the Tribe. The center first opened in 1995. In 2000, it received the highest achievable accreditation from the Accreditation Association of Ambulatory Health Care (AAAHC) for its high standards and commitment to high quality care. An ongoing emphasis on quality allows the Tribe to maintain this standard.
The Health Center is on the tribal reservation land in Coos Bay, Oregon. The approximately 7, 000 square foot facility houses a modern outpatient clinic with 3 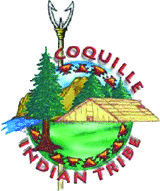 The Coquille Indian Tribe was terminated in 1954. On June 28, 1989, the Coquilles regained their status as a federally recognized Indian tribe. After 35 years of “termination” and federal policy that denied their status as Indian people, Public Law 101-42 restored the Coquilles eligibility to participate in federal Indian programs and to receive federal funds for tribal education, health, and law enforcement programs. The Coquille Restoration Act recognizes the sovereignty of the tribe and its authority as tribal government to manage and administer political and legal jurisdiction over its lands, businesses, and community members. Its members are descended from people who inhabited the watersheds of the Coquille River system, a small portion of Coos Bay at the South Slough, and areas north and south of the Coquille River mouth where it enters the ocean at present day Bandon. Coquille headmen signed the treaties in 1851 and 1855. Because neither treaty was ever ratified by Congress, those Coquille people and their descendants were denied a permanent homeland until the modern Coquille Tribe negotiated several land purchases, which constitute today’s 6,400 acre tribal land base.

Coquille ancestral territory encompassed more than 700,000 acres, ceded to the US Government.

Tututni is an Athabascan language of southwest Oregon. A second language, Upper Coquille, is considered by most linguists to be a dialect of Tututni. (The word “upper” does not have anything to do with the language, but refers to the original location of the people on the upper part of the Coquille River. The “Lower Coquille,” or Miluk Coos, speak a Penutian language completely unrelated to Upper Coquille.) Like many other West Coast Indian tribes, the Tututni and Coquille Athabaskans were relocated to the Siletz Reservation in Oregon during the 1800’s, where they were merged with other native peoples and their languages rapidly vanished. Today the Coquille language is no longer spoken and the Tututni language is only spoken by a few elders, but some young people are working to learn their ancestral language again.

The Tribe is the second largest employer in Coos County, Oregon, with successful business ventures in forestry, arts and exhibits, gaming and hospitality, high-speed telecommunications and renewable energy.

Coquille Economic Development Corporation (CEDCO) was established in 1991 by the Coquille Indian Tribe to develop business enterprises that foster Tribal self – sufficiency while contributing to the economic vitality and quality of life of the region. CEDCO is governed by a Board of Directors appointed by Tribal Council, and is delegated responsibility for economic development and business enterprises intended to generate revenue to support Tribal governmental operations. The CEDCO Board of Directors meets quarterly, and publishes an annual financial report to the Tribal Council and Tribal membership. Current CEDCO ventures include: The Mill Casino Hotel, with 490 employees; Heritage Place, an assisted living community in Bandon, Oregon; Coquille Cranberries, producer of organic cranberries; and, Tribal One Broadband Technologies, LLC, dba Orca Communications, a fiber optic data transport company. Approximately 50 acres of waterfront have been purchased for Economic Development.

The Coquille Indian Tribe became a federally restored Tribe on June 28, 1989.
The Coquille Indian Tribe has approximately 6,450 acres of land in trust. Of this, 5,400 acres is timberland located near Bridge, Oregon, and is managed by the Bureau of Indian Affairs for the Tribe. The Tribe provides services to its members residing in a five county service area consisting of Coos, Curry, Douglas,
Jackson and Lane counties. Tribal membership consists of 824 Tribal members, less those who have passed over to historic rolls.