The Roger Saux Health Center opened in September 2006. It was moved approximately 0.5 miles from its previous location within the village of Taholah, Washington, and expanded its physical capacity. Features include 8 operatories, an instrument processing center, a small lab, administrative offices and a reception desk. The service area includes Grays Harbor and Jefferson counties of Washington, although it is not uncommon for individuals to travel greater distances for services. Attending the clinic is a dedicated staff and a cooperative atmosphere 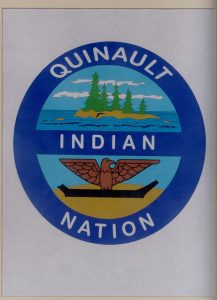 The Roger Saux Health Center, located in Taholah, Washington, provides comprehensive ambulatory medical and dental care. The 5,379 square feet sized clinic was constructed in the 1960’s and is JCAHO accredited. In addition, the Tribe operates a remote health station in Queets, Washington. The Tribe also operates an outpatient alcohol/substance abuse program that is part of the Tribe’s Social Service department. The Roger Saux (Dental) Health Center in September 2006.

The health center had 16,834 ambulatory care visits in fiscal year 98. The Contract Health Service Delivery Area (CHSDA) is Grays Harbor and Jefferson Counties. The enrolled tribal population is 2,453 and the Indian population living on or near the Reservation is 2,951. The registered population for health programs is 6,537 and the active health clinic user population is 3,131. The leading causes of death are heart disease, malignant neoplasm, cerebrovascular disease, accidents other than motor vehicle, and homicide. There were 2,386 Active users in 2002.

The Quinault (/kwɨˈnɒlt/ or /kwɨˈnɔːlt/) are a group of Native American peoples from western Washington in the United States. They are a Southwestern Coast Salish people and are enrolled in the federally recognized Quinault Nation of the Quinault Indian Reservation.

The Quinault Nation is governed by an 11-member business committee, which meets with officers of the General Council. It functions under a set of by-laws, which the Tribe adopted August 24, 1922. The Quinault Indian Nation is a sovereign nation with the inherent right to govern itself and deal with other tribes and nations on a government-to-government basis. By-laws established in 1922 and a constitution approved in 1975 form the foundations of the modern-day Quinault government.

The Self-Governance Act of 1988 began as a demonstration project in the Bureau of Indian Affairs (BIA). In 1990, this tribe took the challenge, along with six other tribes, to implement self-rule in Indian affairs. This law was amended in 1991 and authorized planning activities in the Indian Health Service (IHS). It was obvious that tribes could manage their own affairs better and make their own decisions without external interference. This is the basic underlying philosophy of Self-Governance.

The Quinault are named after their largest settlement, kwi’nail (present-day Taholah), at the mouth of the Quinault River. Their original territory extended up the river to Lake Quinault and along the Pacific coast from the mouth of the Raft River to Joe Creek, near Pacific Beach. Historically, the Quinault were one of several societies on or near the coast in Washington state’s Olympic Peninsula. These societies included, from north to south, the Makah (on Cape Flattery), Ozette, Quilleute, Hoh, Queets (almost identical to the Quinault in language and customs), Quinault, Copalis-Oyhut, Chehalis, Shoalwater Salish, Willapah, and Chinook on the Columbia estuary. All those societies engaged in an interregional system of trade, marriage, feasting, and raiding and spoke a Chinook lingua franca.

Settlements Villages are found up and down the Quinault River. Thirty-eight sites were documented in the 1920s, although only twenty might have been occupied at any one time. Villages were located by favorable fishing spots and averaged from one to ten multifamily houses. Houses were built side by side facing the river. A post and beam construction with red cedar plank siding and gabled roofs was used. Houses varied in size from 30 to 60 feet (9 to 18 meters) in length and 20 to 40 feet (6 to 12 meters) in width.
Since their relocation to the Quinault Indian Reservation, the name “Quinault” has been associated with all the Indians who live on the 208,150-acre reservation regardless of their original cultural affiliations. The contemporary Quinault have forged a common identity based on shared residency and the collective struggle for control over their natural resources. In 1975 the Quinault reorganized their government and ratified the Constitution of the Quinault Indian Nation (QIN). The nation includes the descendants of the Quinault, Queets, Hoh, Quileute, Chehalis, Chinook, and Cowlitz.

Salmon and steelhead fishing was the major economic activity of the Quinault people. In addition, the rich supply of timber played an important part in their lifestyle. They lived a rich existence with hunting, fishing, and ample supplies of timber for building and firewood.

Currently, only enrolled members of the Quinault Indian Nation and their guests are allowed onto the beaches throughout the reservation. However guests are able to obtain access passes that allow them to use the beaches for the day issued.

The Quinault Indian Reservation, at 47°25′05″N 124°08′19″W, is located on the Pacific coast of Washington, primarily in northwestern Grays Harbor County, with small parts extending north into southwestern Jefferson County, 45 miles north of Hoquiam. It has a land area of 189,621 acres (316.331 sq mi).

The reservation is a large wedge of Pacific coast below Lake Quinault on both sides of the Quinault river. Quinault Reservation communities include: Amanda Park,  Queets,  Qui-nai-elt Village,  Santiago, and Taholah.  The Quinault people settled onto reservation lands after signing the Quinault Treaty with the former Washington Territory in 1856.

The Quinault Indian Reservation is a land of magnificent forests, swift-flowing rivers, gleaming lakes and 23 miles (37 kilometers) of unspoiled Pacific coastline. Its boundaries enclose over 208,150 acres (84,271 hectares) of some of the most productive conifer forest lands in the United States . Conifer forests composed of western red cedar, western hemlock, Sitka spruce, Douglas-fir, Pacific silver fir and lodgepole pine dominate upland sites, while extensive stands of hardwoods, such as red alder and Pacific cottonwood, can be found in the river valleys. Several major rivers cross the Quinault Indian Reservation (QIR), including the Queets, the Raft, and the main stem of the Quinault River. The Reservation is ringed by the Olympic National Forest, Olympic National Park, Washington State Department of Natural Resources lands, Copalis National Wildlife Refuge, the Olympic Coast Marine Sanctuary, and by private commercial timberlands.

Quinault (Kʷínaył) is a member of the Tsamosan (Olympic) branch of the Coast Salish family of Salishan languages. Quinault is a Salishan language of Washington state. The last fluent speaker of Quinault passed on in 1996, but many elders remember something of the language, and some young Quinaults are working to keep their ancestral language alive.

The economy for Quinault Indian Nation is mainly derived from the Quinault Beach Resort and Casino, timber, and various fishing entities (Quinault Pride Seafood, etc.). Nearly 700 people are employed by QIN and its enterprises, making it one of the largest employers in Grays Harbor County .

Twenty-five thousand years ago, woolly mammoths roamed here as glaciers plowed the land, creating the rolling terrain which makes up much of the Reservation today. The glaciers also created Lake Quinault , the gem of Quinault country. The lake’s twelve miles (19.3 kilometers) of shoreline enclose 3,729 acres (1,509 hectares). As a wet, mild climate began to evolve 12,000 years ago, the glaciers withdrew to the higher peaks of the Olympics. These conditions led to the development of forests of centuries-old trees, towering nearly 300 feet into the sky, and a land of untold forest resources.

The General Council meets annually the last Saturday in March to hold elections, accept new tribal members, allocate fishing grounds, and discuss other issues relevant to tribal operations. The Quinault Business Committee, which consists of four executive officers and seven councilmen, is entrusted with the business and legislative affairs of the QIN throughout the year. 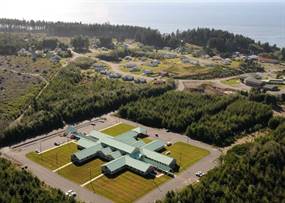