I first met Jordan Remington, a Quileute artist and performer, when they performed as the incredible Hailey Tayathy at the birthday party of a mutual friend. I fondly remember the fierce and unapologetically Indigenous performance. Since then, I have seen Hailey make appearances at Native events and gatherings in the Seattle area, including shows produced by Indigenize Productions. Like many others, I have struggled with feelings of grief and loss in the time of COVID-19. As our communities face yet another pandemic amidst ongoing colonial terror, seeing Hailey Tayathy reclaim Seattle as an Indigiqueer space from which we will not be erased in a segment of THRIVANCE, a virtual Indigenous drag show curated by Enbeguiling, moved me to tears.

Survivor from Jordan Remington on Vimeo.

I’ve been to a lot of queer spaces, drag spaces. This is something different. I see drag in it, but I also see ceremony.

There is something different about my performances, something like ceremony. If I was doing just drag, I wouldn’t feel comfortable wearing regalia like I do in the THRIVANCE performance. I’ve tried to do more of what you’d expect drag to be—put on a poppy song and dance as hard as I can—but those performances don’t feel as rewarding and don’t have the same impact.

I tend not to perform in drag shows. I’ve only performed at a club once, so THRIVANCE was fun. It is a full drag show with all Indigenous queens and kings.

Watching your THRIVANCE performance, I realized that you are part of what survived the burning of Quileute art. Two Spirit artists are. You referenced the loss of art. Now, you’re reliving and remembering it.

The art was destroyed, but the people are still here. My family has a history of reviving the Quileute culture. My great-aunts and great-uncles started secret underground drum circles to keep our songs alive. My great-grandfather recorded and documented our language, which I’m learning now. I’m carrying forward that legacy of reclaiming what was missing.

Tell me about your choices in the scene where you’re doing a breakdown dance with the backdrop of the Seattle skyline.

I wanted to be by water. Water is a big part of our way of life for coastal tribes. Being an urban Native, I wanted to buck people’s expectations. If I say I’m filming near water, people expect me to be on a remote beach somewhere. Instead, I’m at Gasworks Park, a piece of land in north Seattle that was set aside for industry and only recently became public land. I’m surrounded by people (everyone stay back, COVID [laughs]). There were people there having lunch, not expecting a performance… and they get a few minutes of Indigenous representation.

The dance movements are based on Quileute dance forms—women form a protective circle around masked dancers and do those back-and-forth arm motions. Since I was a little kid, I was always drawn to that part of the dance, the women’s part. That’s what I emulated.

With the combination of Seattle, urban space, your regalia, the dances, I got this strong #landback vibe. You’re claiming this patch of grass within a huge city.

Earlier this summer, I was commissioned to paint a mural in Capitol Hill. After taking a short break due to protests and police barricades, I finished the mural while that area was the Capitol Hill Autonomous Zone. It was a really cool atmosphere with people appreciating the art. 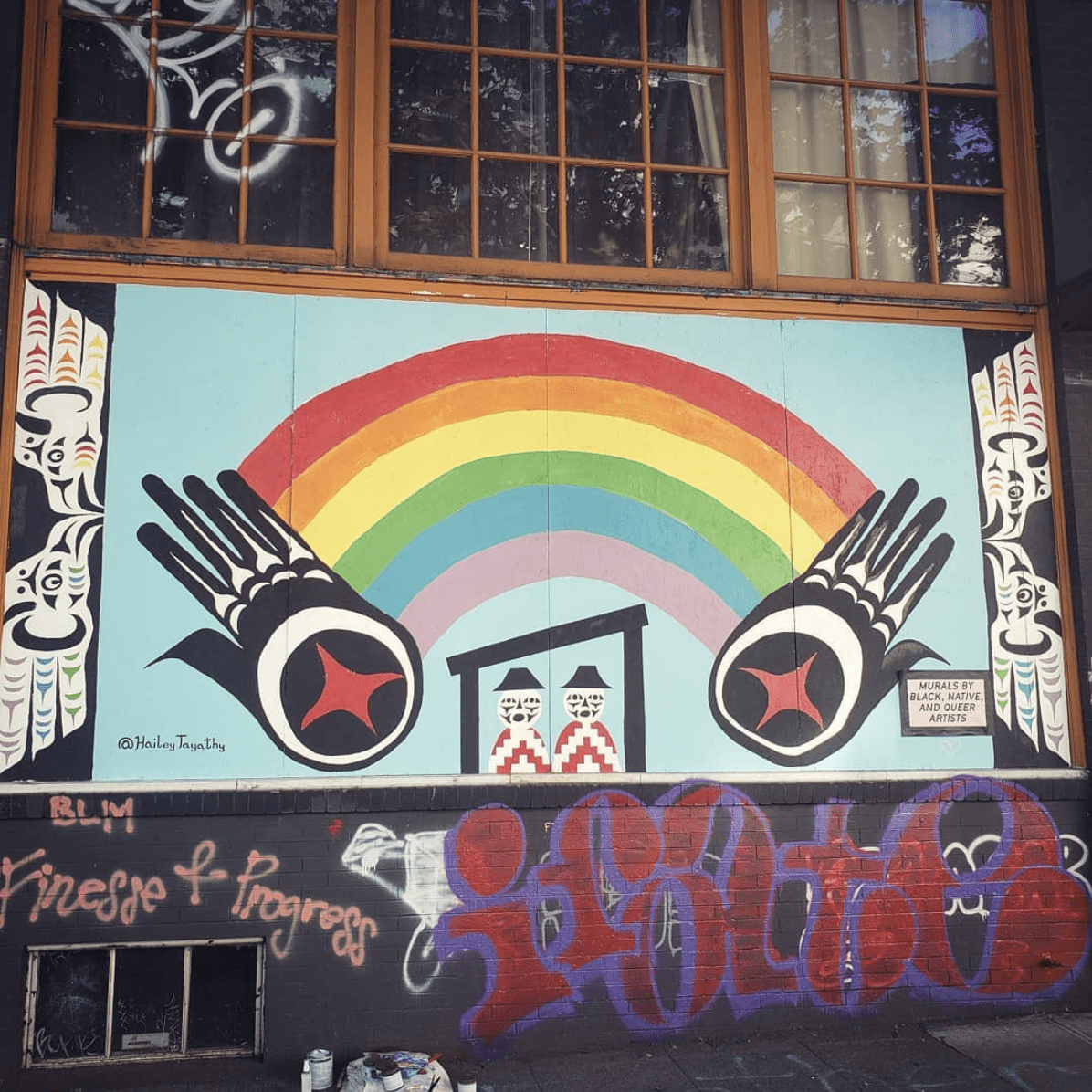 Then, after police broke up the Capitol Hill Autonomous Zone, the mural ended up behind one of their barricades again. I’d get photos from friends of the mural behind police lines. I’d reclaimed the space and then the police took it back. [Laughs.]

What’s your vision of Black-Indigenous-Queer solidarity in this moment?

Indigenous and Black communities have really come together in this time. Often, our two communities are pitted against each other. Colonization uses divide and conquer as a strategy. It’s been cool to see Native people get more on the front line in a way that is supportive, realizing that we are struggling with similar issues and coming together to hold space collectively.

There’s also been needed back-and-forth about these movements—for instance, when Native people are like, “This is our land, please leave,” that can bring up weird feelings for Black activists. They didn’t take our land. They were brought here against their will and can’t really leave. So as Indigenous people we can be conscious of our audience when we go off about #landback. And vice versa, there was a chant in the protest that went, “Whose streets? Our streets.” It’s interesting to be surrounded by white people screaming, “Our streets.” I’m like…let’s think about this for a minute. But lately they’ve been shouting, “Whose streets? Duwamish streets.” There’s conversation about how our movements can better respect each other.

I’ve been thinking a lot lately about the role of art in activism. I tried to think of ways my art could support Indigenous protestors—free protest signs for Indigenous folks, things like that. I think drag has potential as a medium for a specific message. Drag itself is a disruptive art form. You’re walking down the street, and you see a drag queen, you’re like “Whoa!” Drag says, “I am not subtle. I will slap you in the face with my message.” I said earlier I’ve only performed in a club once. I want to figure out how to go into a club where everyone is partying and be like, “Okay, listen up for five seconds,” and totally kill the mood. [Laughs.]

To be more disruptive in those spaces?

Yeah, but it’s about figuring out what art would impact someone dancing in a club, six drinks in. What’s going to stick? It’s easy for messages to get brushed off in that environment.

All videos and photos in this post are copyrighted by Jordan Remington. Support Jordan’s art on Venmo @Jordsrem.