A Conversation with Lenny Hayes

We are familiar with the many stories highlighting the ways that European colonialism has devastated the Indigenous peoples of the Americas. These stories must be told. As important, however, are the stories carried by Native people, families, and communities who have found healing by (re)membering stories older than America. These stories of strength and resiliency allow Native people to see ourselves as agents of our own futures. The life story of Lenny Hayes, Sisseton Wahpeton Oyate, mental health therapist, educator, and activist, is one that speaks to the healing power of (re)membering stories of the original and complex gender systems that were once common across Turtle Island. 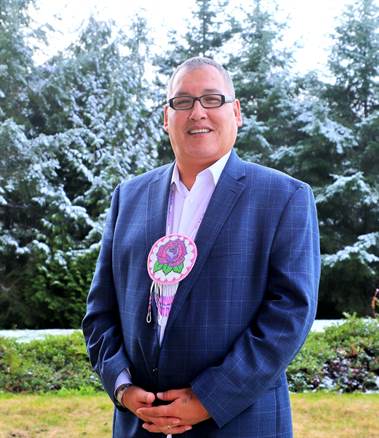 Like all Indigenous people, Lenny has his own relationship with colonialism. “I am a survivor of child sexual abuse, child mental/emotional abuse, and physical abuse,” he says. He goes on to add:

I’m also a survivor of the foster care system. I became a ward of the court at ten and at seventeen was emancipated by the tribal court system, was pushed out and told, you’re an adult, take care of yourself. I wasn’t connected to culture and spirituality as a child. I was moved from home to home. I was in group homes. I was forced to go to boarding school at ten, and I was raped by three older boys in boarding school at the age of ten.

Lenny has not had an easy life. But through these struggles, he feels connected to all of his Indigenous relatives. He has devoted his life to educating Native people on the impacts of historical trauma and on the domestic violence faced by Two Spirit and Native LGBTQ people.

Lenny’s journey with his partner has not been separate from the healing he has done though his Dakota culture. “My connection to culture and spirituality began with a Dakota Two Spirit woman who took me into my first sweat lodge and who taught me how to carry the rocks in and to tend the fire…how to make tobacco ties, taught me about our medicines, and most importantly taught me how to carry myself as a Dakota winkta.” Like so many others who’ve found healing through the decolonization of Indigenous genders that took root in the early 1990s, Lenny has been finding self-love through connecting with the power of traditional Two Spirit gender roles. He tells us:

When I go in and talk about being a Two Spirit male, I say to people that if I was living before colonization, I imagine my role would be people in the community coming to talk to me and me counseling them, talking to them, listening to them. That would be my role as a Two Spirit man, and I’d probably be called a medicine person. That helps me embrace who I am as a Native, as a winkta, as a Two Spirit male. I find enjoyment in helping people. … Because the creator gave us gifts.

Lenny has combined traditional approaches to wellbeing—like listening to his elders—with Western mental health practices to walk in balance and serve his people. This combination has allowed Lenny opportunities for self-healing and helping other Two Spirit people.

He tells us a story of how listening to his elders informed his practice as a mental health provider. He once gave a presentation in a tribal community, and an elder took issue with his frequent use of the word “trigger.” He describes the interaction that followed:

“That word sounds negative. It’s a powerful negative word,” [she told him]. I want you to start using the word reminder. [She adds], “We as Indian people believe everything has a spirit—the trees, the grass, the wind, the rocks. Even our feelings are a spirit—sadness, anger, those are all spirits. When those spirits come to visit, we have the ability to tell them to go away.”

So when I have a reminder that comes to me, I validate that feeling, then I have the choice to be stuck in it, feel it, go through it, then lastly I have the ability to say to that spirit, you can go away now, knowing they’re always going to come back and visit.

Ever since, Lenny has referred to these “triggers” as reminders of memories. And so it is, difficult memories and memories of the ancient and powerful roles Two Spirit people have held for millennia, are all worthy of naming, empowering each survivor to decide which spirits to feed for themselves, and remembering that the ability to do so lives within each person.

Our conversation with Lenny reminds us of the power of our own culture to heal and highlights the need for more Native and Two Spirit professionals in healthcare. As Lenny reminds us, “We are all gifts from the Creator.”